DONATE TO THE SHUBERT 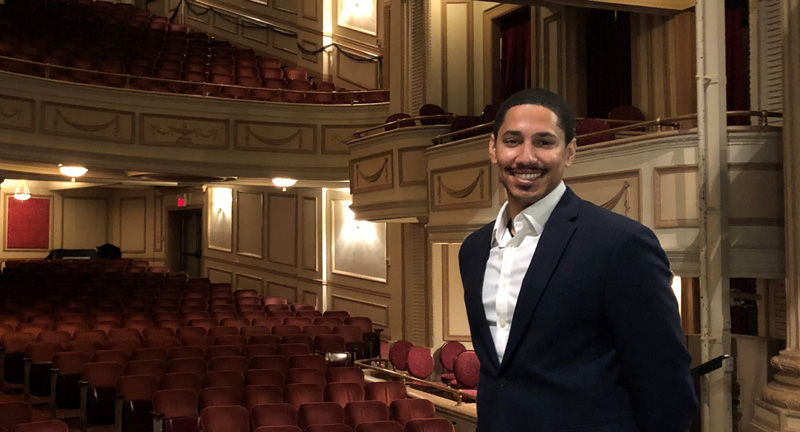 Anthony McDonald has been appointed as the new Executive Director of the historic and legendary Shubert Theatre effective March 15, 2021, it was announced today by Chad Whittington, CAPA (Columbus Association for the Performing Arts) President and CEO, and Len Suzio, CAPA-Connecticut Chair, Board of Directors.

A search led by a committee including members of both the CAPA Columbus and CAPA Connecticut Boards, led to Mr. McDonald’s selection from a field of industry leaders from across the country. The search was handled by Connecticut-based AMS Planning and Research, a highly regarded arts consulting firm that has worked with CAPA for a number of years. A priority of the national search was to engage the broadest field possible of qualified and diverse candidates so the right person could be selected to lead the Shubert into the future.

Meet Anthony McDonald and hear his plans for the Shubert - News 8's Ann Nyberg recently spoke to him, click here for the full interview.

Chad Whittington commented, “Anthony’s appointment as the next Executive Director of CAPA CT and the Shubert Theatre is an exciting and important step into our future. Anthony’s theatre experience and his vision for the Shubert make him the right person to lead the organization forward as we strive to meet the changing needs of the community and to make the Shubert a home for everyone. The future is bright at the Shubert!”

Len Suzio added, “I was delighted to be part of the search committee and have the opportunity to meet a number of professional candidates. Anthony McDonald brings a broad spectrum of experience to the Shubert which will strengthen the theatre’s rich legacy of Broadway productions and help implement the theatre’s vision for expanded programming and audience growth as we plan for the theatre’s continued success.”

Having worked on several Broadway productions, McDonald has extensive theatre management experience in general, company, house and venue management. Most recently, he worked with the Nederlander Producing Co. of America at both the Minskoff Theatre, home to DISNEY'S THE LION KING, and prior to that, at the Gershwin Theatre, home to WICKED. As a general manager, McDonald has been an associate on Broadway’s FIRST DATE, Off Broadway’s FUERZA BRUTA: WAYRA, assistant to Peter Boygo on TRIP TO BOUNTIFUL, and general manager of The Miranda Theatre Company’s THEY PROMISED HER THE MOON, and Broadview Phoenix/Magis Theatre Company’s MIRACLE IN RWANDA. He also served as the general management consultant with Show Shepherd. In addition, he was the company manager of the workshop of BEHIND THE PAINTING, and assistant company manager on Broadway’s HOLLER IF YA HEAR ME.

McDonald received his BFA from Howard University in Theatre Arts Administration and his MFA from Columbia University in Theatre Management and Producing. He is a proud member of the Association of Theatrical Press Agents and Managers. He and his wife are looking forward to their move to Connecticut and meeting the New Haven community.  McDonald commented, “It's such an honor to be given the opportunity to lead this historic theatre into the future. The city of New Haven is such a diverse, vibrant community and I look forward to welcoming everyone into our home.”

As Executive Director of the Shubert, New Haven, McDonald will lead the Connecticut Not-For-Profit Organization as a key contributor to the cultural vibrancy and diversity of the region and as an effective partner to New Haven’s arts and culture sector. McDonald will be charged with diversifying and expanding the Shubert’s programming and educational offerings to broaden appeal and attract new audience members to the theatre. He will continue to strengthen the brand and build on the iconic stature of the Shubert Theatre and bolster the theatre’s financial foundation with expanded fundraising efforts through sponsorships, grants and audience support. He will provide overall leadership to the Shubert’s professional staff in all areas including financial, operational, fundraising, marketing, education and engagement to ensure all policies and procedures are effectively implemented across all components of the organization. He also will provide professional and institutional guidance to the Shubert staff for advancing social and racial justice in collaboration with other members of the arts community.

Anthony McDonald succeeds John Fisher who announced his plan to retire in February 2020. Fisher has served as the Executive Director of the Shubert for the past 20 years. He originally began his tenure at the Shubert in 1997 as General Manager of the theatre and was appointed Executive Director in 2001 when CAPA began management of the Shubert Theatre. John Fisher said, “I have had the honor and privilege to lead this most historic theatre and am very proud of the solid foundation we have built for the Shubert. I am thrilled and delighted to welcome Anthony to New Haven and I know that our legendary Shubert Theatre will be in good hands with him.”

About the Shubert Theatre / Connecticut Association for the Performing Arts
The historic Shubert Theatre (CAPA-CT) is a not-for profit arts, education, and community organization serving the people of Connecticut, and in particular, the New Haven region. As a public resource, the Shubert presents a wide array of programs to diverse communities. Programming includes performers representing many cultures, nationalities, and varieties of artistic expression. Partnerships with a wide range of organizations enrich the Shubert’s service to diverse local and regional communities. The Shubert delivers comprehensive education and community engagement programs through its variety of children and family programming, educational partnership with and operational support for New Haven’s Co-Op Arts Magnet High School as well as offering a Summer Theater and Arts Camp for young people. The Shubert Theatre is a business unit of the Columbus (Ohio) Association for the Performing Arts, or CAPA. With a strong local Board of Directors, and drawing on programming support and shared services from CAPA, this partnership creates unique opportunities for expanded programming and administrative efficiency.

About CAPA – Columbus Association for the Performing Arts
A non-profit, award-winning presenter of national and international performing arts and entertainment, the Columbus Association for the Performing Arts (CAPA) was founded in 1969. Since then, CAPA has become a cultural anchor for the Columbus, OH community and reached beyond to be a model of innovative cultural enterprise. CAPA’s ownership of CAPA-CT is a national model for cross-market theater operation with a goal of strengthening arts communities and contributing to community and economic development.  CAPA serves as a theatre owner/manager, presenter of performing arts, shared services manager, theater-based community developer, and fundraiser. CAPA is a complex organization, operating through several partnerships and business entities with an overall budget typically exceeding $23 million and a core operating budget over $16 million.